Virtual Reality in amazing Jurassic dino park and prehistoric museum. With vr roller coaster to ride also we have vr cave and vr tunnel all in 360!
3.4/5 Votes: 2,080
Report
Developer
Reality Games VR 360 SimulatorVersion
3.26
Updated
March 1, 2022Requirements
6.0 and up
Size
382MGet it on

Virtual Reality in amazing Jurassic dino park and prehistoric museum. With vr roller coaster to ride also we have vr cave and vr tunnel all in 360!
All virtual reality devices like cardboard, daydream, vr-box are support in our roller coaster park.
From ancient carnivore therapods like Velociraptor to forgotten herbivore sauropods like Brachiosaurus and Stegosaurus. Meet all dinosaurs in Tyrannosaurus (T-rex) simulator. Choose your favorite from Spinosaurus or maybe Triceratops and have fun with our simulator.


Have you ever wanted to meet prehistoric dinosaurs in real life? Now you can be closer than ever!
In our simulator you can explore the whole park, meet big herbivore sauropod dinos like Brachiosaurus and Stegosaurus. VR horror is like a movie story. What happened to Spinosaurus and Triceratops?

This dinosaur game give you an opportunity to spend a lot of time in this 360 Jurassic production.
All modes like a movies or roller coaster rides can be played in Virtual Reality mode for Cardboard, DayDream, and VR-BOX.
Theme park mode allows you to explore the museum. No limitation, you decide where you want to walk and what kind of dinosaur to meet. Remember herbivore sauropods like Brachiosaurus, Stegosaurus or Triceratops and carnivore therapods like Tyrannosaur and Velociraptor waiting for you. The dream comes true. You can stay beside one of the biggest creature closer than ever!

Check out and take a ride on roller coaster in the island.
It’s pretty big and fast vr roller coaster. Watch out they can be really swept off your feet.
Not all people can ride on a real roller coaster so the same will be in virtual reality!

This VR Jurassic park is like a 360 prehistoric time machine in our world.
But more safely! Dinosaurs were bigger and more dangerous than animals from our world. Now you can meet deadly creatures – carnivore therapods like Tyrannosaurus aka T Rex simulator, Spinosaurus or Velociraptor with no horror and harm on your life. Survive this adventure in one of the forgotten island. You can take this prehistoric world in your pocket and show this vr horror and museum to friends almost everywhere. Also, you can invite them to our roller coaster park!

Simulator with most popular creatures from deadly carnivore therapods Tyrannosaurus aka T-Rex, Spinosaurus, through Velociraptors and Triceratops. You can look at them in all scenery. In the natural environment in the jungle on an island. Also, vr cave and vr tunnel wait. Explore them and find herbivore sauropods Brachiosaurus and Stegosaurus.

KEY FEATURES:
– Simulator ready for Cardboard, DayDream, VR-BOX and many others
– Amazing Jurassic era world environment from jungle and vr cave through vr tunnel all on horror island
– Easy control, simply look on the ground to go or use mobile joystick
– Many species of creatures, from hunter carnivore to herbivore Triceratops & Stegosaurus
– Meet your favorite dinosaurs like Tyrannosaurus (T-Rex), Spinosaurus and Velociraptor
– Prehistoric 360 virtual reality simulator for your phone
– Achievements by exploring jungle
– Ancient museum in all kind of creature sauropods Brachiosaurus and therapods

REQUIREMENTS & NOTES:
To use Virtual Reality you need Cardboard, DayDream or any VR-BOX for the device.
For better experience use headphones.
Remember that Virtual Reality didn’t work on all devices its many reasons for that.

Do not wait any longer to download this dinosaur game. T Rex and many others dino waiting for YOU! Join now to our roller coaster park!

- The new roller coaster "Maxi Shoot" is here!
- There will be a new attraction every two weeks!

- We have added a completely new, more readable menu with an attractive design.
- More dinosaurs like Giantosaurus, Allosaurus, Deinonychus, Ankylosaurus and many more. Now 24 in total!
- We have 39 attractions in total, including 28 rides and 11 movies.
- Now more realistic than ever.
- From now, our movies and rides can also be watched without VR goggles in No VR mode! 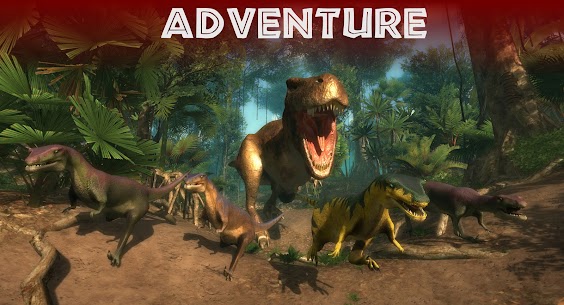