Plunge into the fantasy world of a 3D turn-based strategy game rooted in the legacy of the genre’s greatest classics.
4.6/5 Votes: 31,653
Report
Developer
HeroCraft Ltd.Version
1.0.65
Updated
February 25, 2022Requirements
4.4 and up
Size
34MGet it on

Plunge into the fantasy world of a 3D turn-based strategy game rooted in the legacy of the genre’s greatest classics.

Form a party of majestic heroes and equip them to conquer new darkness lands, complete the quest, and fight dozens of monsters.

Build up your unique power, upgrade equipment and armor, develop your Castle and bastion. Bring the flames of war upon the enemy in our old-school tactics game. Show your abilities in the majestic world of turn based RPG offline games. Challenge other players, earn awards, and improve your ranking!

Begin your war today! Become a Lord of Discord!

Dozens of epic heroes from your castle stand ready to fight under your banners, vanquishing the enemy with their might and magic.

Locations inhabited by fantasy elves, orcs, undead, and other races await! Using your warriors’ unique abilities, cleanse these lands of your foe in traditional turn based RPG. Conquer territory to get resources you need to build and upgrade your bastion and Castle. Combine might and magic to overthrow the darkness. As they soldier on through countless battles, novices and acolytes will become seasoned veterans and powerful mages, able to fight the darkness enemy in isometric RPG games.

• old-school isometric RPG with turn-based combat;
• full 3D fantasy environment;
• dozens of epic heroes and monsters to hire;
• multiple of enemies with unique abilities;
• conquer lands, develop your Castle and bastion in strategy games;
• PvP strategy battles against players from all over the world;
• exciting quest and missions;

Enjoy the game and thank you for playing with us!
Lords of Discord team. 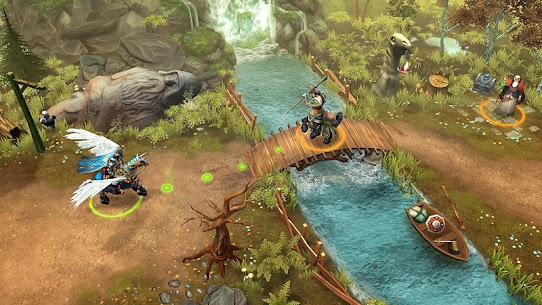