Here is the trending 456 squid game in town with the entertaining concept. Surely everyone has tried once with the red and green light 456 squid game.
0/5 No votes
Report
Developer
Arham RR StudioVersion
1.7
Updated
December 27, 2021Requirements
6.0 and up
Size
56MGet it on

Here is the trending 456 squid game in town with the entertaining concept. Surely everyone has tried once with the red and green light 456 squid game.
Now, this red light folk game is available on mobile phones and you can play it anywhere, whenever you want. Wish to give it a try?
The 456 survival squid game is simulated from real traffic lights, when there is a green light you are allowed to move freely, but when there is a red light you are forced to stop motion. If you still deliberately move when there is a “red light”, you will definitely have to pay the price. The game is full of entertainment hide and seek concept.
Now your motion supervisor is a doll. Try to run as fast as you can to the finish line without being detected by the doll. You have to try to run fast and touch the wall because only the first 5 people to the finish line can survive. If you are not in the top 5, the worst will come to you. Also, if you get caught while moving you will also have to pay the price.
Not a beautiful doll-like in real life, the doll in the red and greenlight game brings death to those who are late and do not follow the rules of the 456
squid game. When the dolls count from 1 to 10 try to run as fast as possible, but when they come back you have to stop motion immediately. You will become stealth to the doll’s eyes if you don’t move when it turns its head.
The doll will change the counting speed continuously, sometimes very quickly and sometimes very slowly. What you need is the speed and acumen of this scary doll in rhythm counting. Or it can be understood that you need to move sneaky but quickly to reach the finish line.


How to play Red Squid.io: Red Light Green Light game:
Touch the player to move
Run fast in the survival game while the doll is counting
Stand still when the doll turns its head
Be one of the 5 people to finish first
The 456 squid game will end if you reach the finish line late and let the red light see you move

Do rate us and leave your feedback below if you like our 456 survival game.

We are a small team, your support is needed. 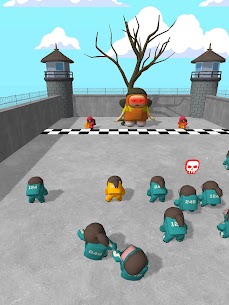