Fold and Create Pictures
Simple gameplay, only tap and FOLD the PAPER.
Cute levels including SPACE CATS, AVOCADOS and many more.
EASY to LEARN but also HARD to MASTER.
This will be the one of the most relaxing time of your life. 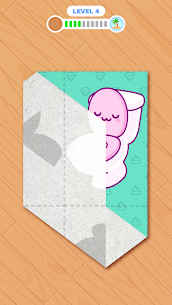