You have an egg factory and all you need to do is make them lay as many eggs as possible.

Starting with a small factory, the eggs are packaged and sold. Use the money to upgrade. The higher the level, the faster the laying speed and the more the price. Open up a new production line and stuff your boxes with your eggs.

Lay as many eggs as you can 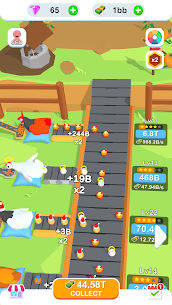