Play the most fun typing games and reach the highest rankings!
0/5 No votes
Report
Developer
AlictusVersion
1.0.7
Updated
December 28, 2021Requirements
5.0 and up
Size
105MGet it on

Play the most fun typing games and reach the highest rankings!
Multiple games are waiting for you with easy controls!
You will have opponents in the game, so make sure to win against them. 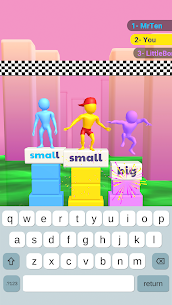