Hunting KING!
0/5 No votes
Report
Developer
RisingWingsVersion
1.10
Updated
February 25, 2022Requirements
5.0 and up
Size
148MGet it on

Hunting KING!
A realistic FPS hunting simulation game where you compete in bowhunting against hunters around the world.
Experience the thrill of life-like bowhunting with simple controls!

Compete against other hunters around the world now!
The exciting hunting competition starts.
1vs1? Nope! You can compete against 4 skilled hunters all over the world in real-time!
Hunt the largest beast and become the best hunter in the world!

Dozens of species of life-like wild animals from well-known hunting spots around the world!
Have you ever hunted Red Deer in the lush forest of Florida?
A giant Grizzly Bear of the vast mountain ranges of Wyoming may ambush you.
What about a Dromedary Camel in the blazing deserts of Namibia, or an elephant at the massive waterfall in Zimbabwe?
Exotic wild animals from all over the world are waiting for you.
Departing now to the famous hunting spots in the world to hunt wild animals that you’ve never seen in other hunting games!

Target their weaknesses!
To become the best hunter, it’s important to be knowledgeable about your quarry!
Check the animal’s size with a Radar and aim for its weaknesses with a UV! 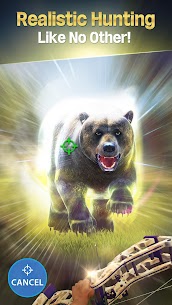