Heroic Anthem Introduction:
Heroic Anthem：A strategy Card Role-playing game with the world of Dante as the background, let you feel the charm of the strategy combination game. Collect characteristic heroes from the four factions and play a beautiful combo! A wonderful journey in another world is waiting for you to explore.

Game Story: A thousand years ago, a war broke out between God and Satan aimed at destroying each other. The long-lasting battle between angels and demons puts the human world on the brink of collapse. In order to stabilize the human world, which is the passage between the two worlds, God and Satan jointly agreed on an agreement to withdraw from the human world.
Although the millennium covenant ended the apparent war, neither angels nor demons have given up their control to the human world. Until that day, the Temple of Wisdom Angels was destroyed and the Book of Wisdom disappeared. At the same time, an ability called “Anthem” appeared in the human world.
Whether it is Holy See knights, unyielding Rebel fighters, sly Demon or mysterious Demon Hunters, all will be summoned by the “Anthem” and fight for you!
And this is just a beginning. . . . . .

[Note: This game requires internet connection]
Game Features:
– Worry free, Easy to Idle
Assign hero to fight
Get Rich Rewards
Play Whenever and Wherever you want 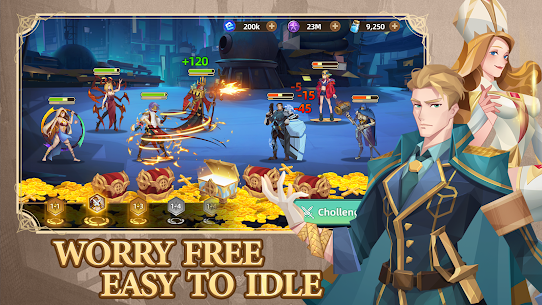