Exciting adventure of the bouncing ball through the helix tower labyrinth. 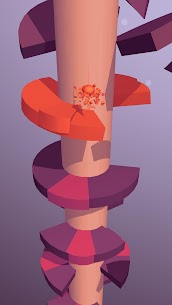