Using moddedfile.com App to upgrade Gift of Christmas Tree, fast, freeware and save your internet data.

Gift Desert of Christmas Tree is a casual game with the goal of growing Christmas trees and accumulating wealth. Simple operation, just click on the tree, you can get resources. With enough resources, trees can grow, and they will surprise you! Let your tree grow fast and add more colors to the Christmas Snowy Night! 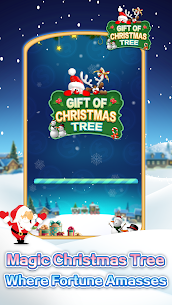