Forbidden Source is a fantasy game which combines RPG and settlement building aspects.

In the game you take on the role of a hero who spent his life looking for a source of unlimited power. Wandering through a fantasy world he meets other heroes who share his dream. He needs to fight against other players in multiple PvP combats, region battles and wars to prove his power.

You are about to immerse into this fantasy RPG world. Fight against other heroes to level up your hero and receive unique items to power it up. Constantly battle for regions to speed up upgrading your settlement. Don’t miss epic quests, which also give valuable rewards.

Look for your own strategy for PvP combats and adjust it when unlocking new features to keep on winning against other heroes.

Would you like to compare your performance with other players? Check rankings for battles, wars and overall. Never give up and fight for unlocking unique overall ranks, up to becoming Immortal.

• Fight against other players in epic turn-based combats.
• Check your own tactics and strategy playing.
• Boost skills with unique spells drawn on a screen.
• Level up your hero and equip him with legendary items.
• Raise and upgrade various buildings in your settlement.
• Collect victory points to compete against other players in battles and wars.
• Unique graphics style.

Support:
Need help with a game? Send us an email to [email protected] or join our Discord server:
https://discord.gg/ZwB8R77

Bug fixes for guide and recruitment 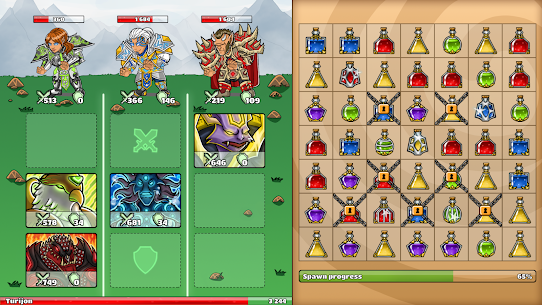