HELP! Doctor, I hurt my feet, ouch! It is so painful (T﹏T) !
Could you please help me to cure my feet? I know you have the best medical tools here!

We have added some items to provide more smoother gaming experience.
And if you have any problems, please leave us your precious feedback!
Thank you for your supporting! 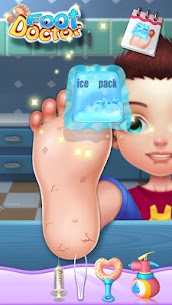