Dinosaurs have been resurrected in the present age!

Can you destroy the highest tower? 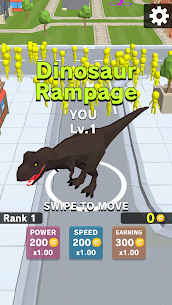