It is a full-fledged puzzle game based on 3x3x3 cube puzzle. 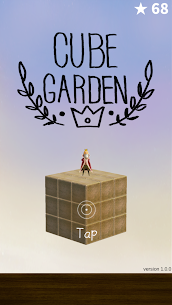