Call for mission is a best action game with awesome features and controls, this offline game is totally an offline and free to play game.
4.1/5 Votes: 18,062
Report
Developer
Start Offline GamesVersion
4.2
Updated
February 28, 2022Requirements
4.4 and up
Size
54MGet it on

Call for mission is a best action game with awesome features and controls, this offline game is totally an offline and free to play game.
This is the era of modern wars where enemy has deployed weaponry on territory around your base. Shooting games offline is one day commando operation to eliminate army and take down their convoys. In this shooting game you will lead the Commando adventure mission along with your alpha team. You will be provided high tech auto guns, sniper guns and modern armor. Time to make an immense victory in this commando survival game.
call for mission Modes:
• Chapter mode

This call for mission – shooting game is survival shooting game in the sequel of Commando Hunters. Your mission would be to cover the fire and then lead your commandos to the enemy sites. Get new shooter experience and join the army of gorilla commando and be the part of this revolution. Show your army the hail of bullets, grenades and massive guns. It’s time to release the fury in this action games – best Shooting Game.

Each level is designed uniquely, enemy are quite smart with modern guns in their hands. you will have to be extra careful while performing in your mission. Get your gun and start eliminating your enemy. This is time to get now this offline game 2020 and show your shooting skills. This is totally an offline and free game 2020.

Modern controls in this shooting game to bring you a unique and immersive shooting environment. It’s time to show your courage and get back what belong to you. It’s a war of country, full of adventure and survival hunters.

This shooting game is a cover operation of an elite special force, which is specialized in abseiling, parachuting and amphibious. join this combat unit, train yourself for assault missions and unconventional high value targets.
Your primary mission is operating in covert combat in this FPS offline game, raiding and front-line reconnaissance should be the part of your mission.
Types of mission you will carry out:
• Counterinsurgency

This offline shooting game is based on chapters, survival and story based single mission. Counterinsurgency and unconventional warfare will be experienced in survival mode. While, direction action and special reconnaissance in the five different chapters.

Fight for your survival till your last bullet and prove yourself a best commando in this best action game. It’s commando game where a war against hidden enemy has begun, who are taking your lands. You are one-man army, you are given assault guns, a single powerful sniper rifle, and modern war training. It’s time to use your army commando war skills, take out all enemy and destroy their safe havens. Prove yourself a best sniper shooter by eliminating your targets successfully. It’s just a commando duty to be fulfilled but also your mission to secure lands, your people and yourself. It’s a fight for survival by becoming gorilla commando. Use all given weaponry rather be pistols, shotguns, sniper rifle or assault gun, chose carefully and be the best military commander. 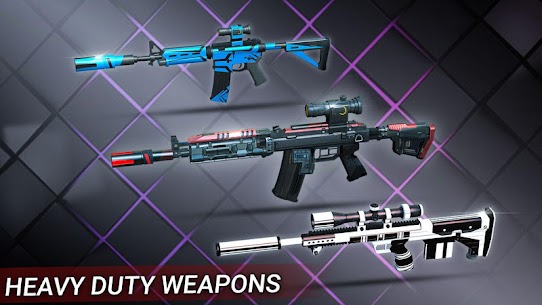