How can you survive in an arena full of Competitive? Crush and Run!
0/5 No votes
Report
Developer
MiniGame.vipVersion
1.0.37
Updated
March 1, 2022Requirements
5.0 and up
Size
81MGet it on

How can you survive in an arena full of Competitive? Crush and Run!

Chop.io is a popular free game around the world, There is only one goal: destroy the enemy in front of you.You can choose several characters to add more experience and strength value, they have a variety of skills and equipment. Fighting other opponents to be the last one in the survival games, and it is vital to make yourself strong and smart.The champion is going to be choose among us

HOW TO PLAY:
Equipment Part:
– Buy weapons by gold coins
– Synthetic weapons make weapons upgrades
Battle Part:
– Hold and drag to move
– Get closer to competitor and attack them
– Run fast and protect yourself
GAME FEATURE:
– Easy and addictive gameplay, control with only one finger
– Several roles with impressive skins and skills
– Survival games with opponents
– Various equipment of different levels
– Qualifying and corresponding rewards 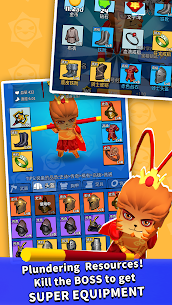