Gameplay
-Swipe to fly balls and break bricks, take aim and fire!
-Find the best angles and positions to wipe out bricks.
-Play skillfully and make the most of the power up.
-Catch props to break bricks more effectively.
-Get the highest score as fast as you finish the game! 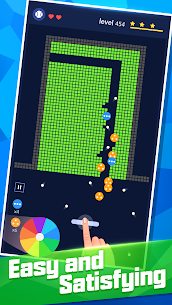