Shoot where you tap.
Try not to fall into the sea before the enemy does!
Can you clear all the stages? 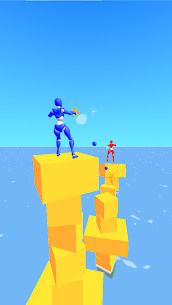