Make your insect squash bugs when they are smaller to increase its mass, just like in an .io ap. Try to avoid bigger creatures by hiding under flowers or use your abilities to run away and survive the insect simulator. Squash the boss to end the round. Follow the evolve course, upgrade your hybrid insects and evolve to the mutated creature that will destroy their bug swarm.
3.0/5 Votes: 789
Report
Developer
5010 GamesVersion
1.6.8
Updated
December 25, 2021Requirements
5.1 and up
Size
21MGet it on

Make your insect squash bugs when they are smaller to increase its mass, just like in an .io ap. Try to avoid bigger creatures by hiding under flowers or use your abilities to run away and survive the insect simulator. Squash the boss to end the round. Follow the evolve course, upgrade your hybrid insects and evolve to the mutated creature that will destroy their bug swarm.

This app borrows a basic idea from spore / evolution games and mix it with elements from ant smasher apps to bring you a new experience. You feed your creatures that you can find in any terrarium, like cockroaches, ladybugs, termites and more. Smash their bug swarm and become bigger. It is also inspired by upgrade and spore evolution games. Smash insects, wasps or other hybrids and discover new species to add to your virtual terrarium. To do so, you have to farm xp. You’ll use these xp points to mutate your ant!

? Weaker insects which are on screen will change their colour and try to run away. Squish them beneath you and feed your character to become the ultimate ant smasher!
? Stay close to the the flowers (or blue water if you have already bought the swim upgrade) while bigger swarms of ladybugs, roaches, wasps, termites and others are near to you. Don’t let them squish you!
? Pause to check if your points are enough to buy an upgrade and evolve your bug. If not, farm more xp points
? You get 1000 xp points every 4 levels, use it to evolve.
? Find 5 sand drawings and win 2000 points + 5 candy canes to help you breed in the anthill.
? You won’t find sand drawings if your level is less than 2.
? 100% Free simulator game.


? Differences between .io games and this app:

Bigger roaches or other species of enemies are faster than you. You can’t eject mass to run away. To lose a ladybug try to hide under flowers, create cobwebs, fly, leave poisonous liquid behind, enter the blue water or use your camouflage ability. While they are touching the liquid, instead of ejecting mass, they will get smaller and more vulnerable. To squash the bugs swarm you must follow them and squish them! When they are weaker, they are also slower. Pause to mutate your weak insect into a hybrid mutant ant smasher. When you evolve your character, it is morphing into new species. Keep evolving to become the strongest bug of this simulation of this terrarium. Download the simulator and follow their evolution!

To win you must defeat the boss and there is only one way to do this. Help your character with its evolution and upgrade its abilities. Mutate your hybrid character and watch it morphing into a new kind. When you’ll be strong enough, go for the smash. While a boss collides with your poisonous liquid, it loses mass. If its mass is smaller than yours, the boss will change its colour and try to run away. Follow it and feed your character with it. Some of the creatures you will encounter are: ladybugs, roaches termites and wasps. it is anxiolytic and satisfying experience. Follow and squash the bug swarm to feed your character with it and end the round.

Explore every available stage to discover different bugs in order to improve your virtual terrarium.

Now, you are the strongest mutant creature in this simulator of their world. Enjoy this satisfying feeling! This app is an addicting, offline game that borrows ideas from .io spore games and ant smasher apps. 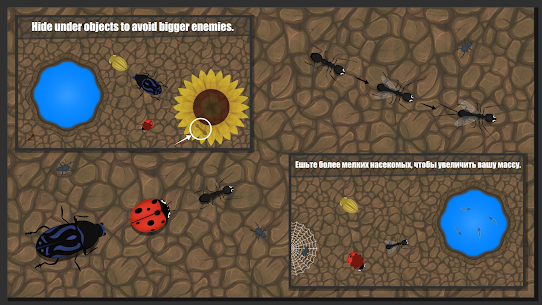